When Kelley’s daughter left for college at Florida State University, the family left her bedroom largely untouched, which included leaving the twin size bed that she’d been sleeping on since she was a kid. After all, her daughter would still be returning home and staying in that room for most holiday and summer breaks.

Still, no one anticipated that Kelley’s daughter would eventually move back into her childhood bedroom after finishing her undergraduate degree. But that’s exactly what happened when she decided to attend a liberal arts college near her parents’ home to pursue a graduate degree in physical therapy.

Young adults living with their parents during or after college is certainly not a new phenomenon, and it’s something that has become increasingly more common over the last two decades, as it provides an opportunity for people to save money while they search for a job, get started in their new careers, or attend school. According to studies, 22 percent of people between 23 and 37 are currently living with their parents for extended periods of time.

Kelley’s daughter returned home prepared to live in her old bedroom for the foreseeable future, but it quickly became evident that her old twin bed wasn’t going to cut it anymore. Not only was the bed frame too small and uncomfortable for a full grown adult, but it was also wasting a significant amount of space in the room.

During her time at FSU, Kelley’s daughter lived in an apartment and got used to having her own space and the freedom that came with it. Even though she was moving in with her parents as an adult, she wanted to be able to enjoy that same sense of ownership over her space. Her bulky bed frame made it difficult to utilize the bedroom to it’s fullest potential as a multi-purpose space where she could relax, work on projects, and practice her skills as a physical therapist-in-training. So as soon as she moved back in, the family set out in search of a loft bed that would free up floor space in her bedroom and provide her with a safe and comfortable sleep experience for years to come.

They started with a trip to their local IKEA. Unfortunately, both the metal and wooden loft bed options that were available in the store were underwhelming for multiple reasons. For starters, everyone felt that all the beds they looked like they were designed specifically for a young kid’s room, which was exactly the vibe that Kelley’s daughter was hoping to avoid for her post-college bedroom redesign.

The bigger issue, though, was that every bed they tested seemed too small and not sturdy enough to give them the peace of mind they needed to make a purchase. In most cases, the entire loft bed would sway when there was any motion while climbing on or lying in the bed.

The family took their search online and quickly found Francis Lofts & Bunks and our Adult Loft Beds, which met their needs for both form and function. Their recent shopping experiences made them wary of purchasing a bed online sight unseen — especially one at such a high price point — but after a few days of looking around, they found themselves drawn back to our beds when no other loft bed options on the market seemed entirely satisfactory.

The family also found it compelling that the company was founded when our CEO, Ryan Francis, found himself in a very similar situation to the one Kelley’s daughter was facing after he moved into a small studio apartment after graduating from college. Knowing that Ryan’s bed was built to solve the same sort of space and design problems made them feel confident that it could do the same for them. It didn’t hurt that there were so many glowing customer reviews for them to refer to on our website. 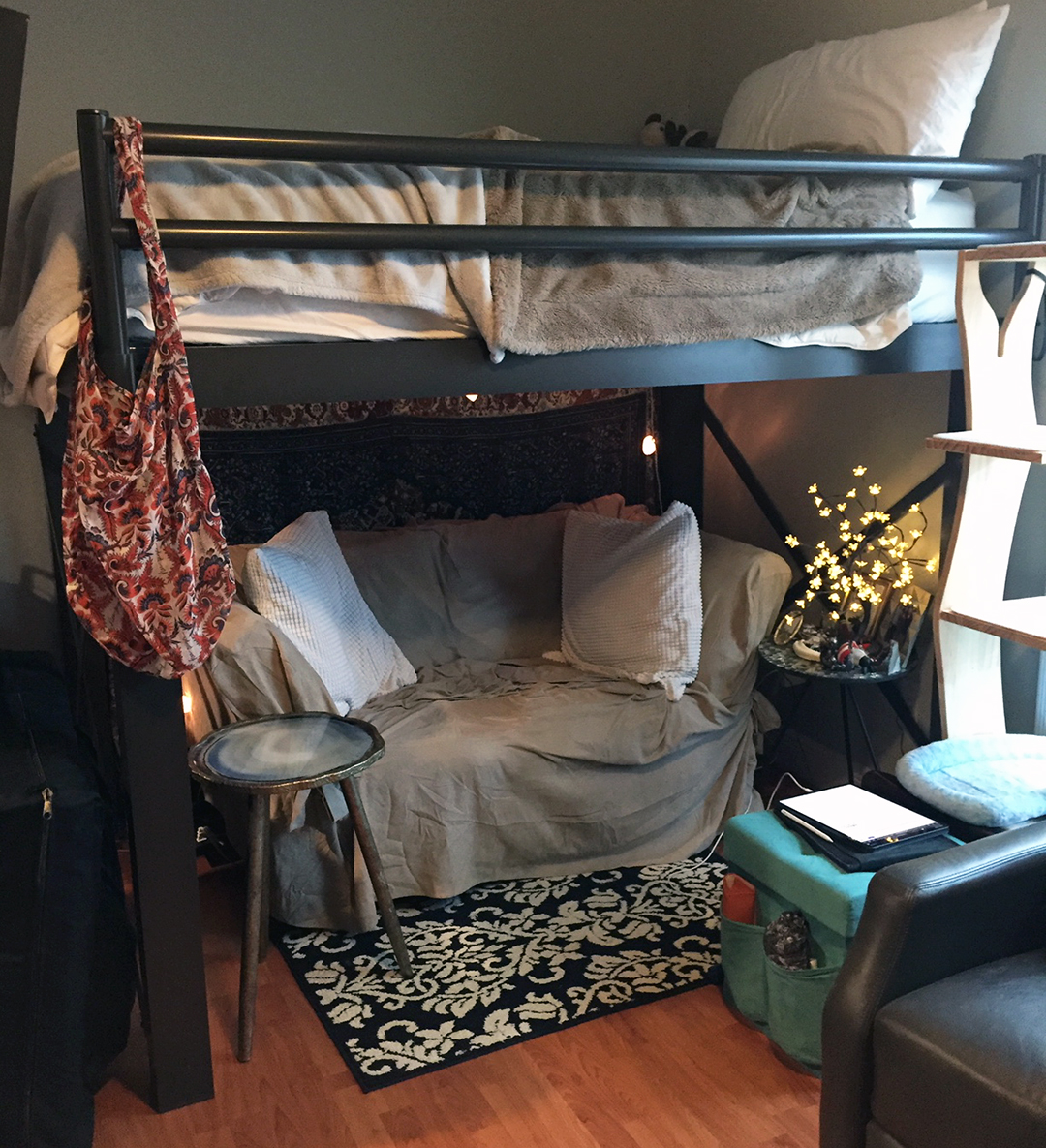 That’s when they pulled the trigger and purchased a Full XL Loft Bed for the room. Kelley’s husband assembled the bed when it arrived and was the first person to try it out. He is 6’2” and 220 LBS.

“It was even great for me,” he said, assuring the whole family that the bed would be more than capable of safely supporting their adult daughter.

They chose the charcoal finish because her daughter preferred a darker color that would match the existing furniture and decor she would be bringing back from her college apartment, including the large tapestry that now hangs on the wall behind the bed frame and acts as a backdrop for the seating area under her bed.

The room’s design came together when a neighbor — who was in the process of moving out of the country — gifted the family with a gently used love seat. Kelley simply bought a new cover for the love seat and just like that, they created a cozy nook where her daughter could read, watch TV, work on homework, or have video chat sessions with her long-distance boyfriend. Conveniently, the love seat also pulls out into a small bed, yet another way that they’re able to really make the most out of the space.

All of the extra floor space has also been beneficial for Kelley’s daughter’s work studying and preparing for a career in physical therapy, as she’s able to set up her large massage table and practice her techniques from the comfort of her own bedroom. Most commonly on her parents, who are the lucky recipients of regular free, at-home massages from a professional-in-training.

As of this writing, it’s been about a year since Kelley’s daughter moved home and redefined her space with an Adult Loft Bed.

“That thing was a lifesaver,” Kelley says. “It’s the best thing we did for that room.”

Kelley loves the bed so much that she’s determined to keep it when her daughter does eventually move out, thinking it will make for a cool guest room experience for family or friends that come to visit.