Moving halfway across the country is a big change for anyone, but John-Paul knew he was in for a major lifestyle upheaval when he prepared to leave the one bedroom apartment he occupied alone in Minnesota for New York City (which is not exactly known for it’s surplus of spacious living options). Overall, it was good news—he’d received an offer to progress his career in the film industry that he simply couldn’t refuse—but he had to move quickly and figure out his living situation on the fly.

Back in the North Star State, John-Paul had created a unique and efficient bachelor pad for himself that saw his bed in the “dining room” area, a choice that allowed him to convert the bedroom into a workspace. Even with this nontraditional arrangement, he still found himself sleeping on the couch most nights. Clearly he wasn’t too attached to this bed, and when he made the last minute decision to head out east, it was an easy call to just leave it behind. Besides, he didn’t actually have a place to live yet. His first month in New York was spent sleeping on a friend’s floor. 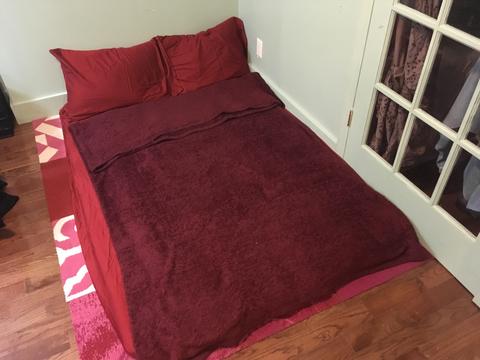 The first iteration of John-Paul’s bedroom, before he had a bed frame.

He eventually found a roommate and a two bedroom, two bathroom apartment in Queens. While an upgrade from the floor, this new place was still a pretty far cry from his previous living situation. The bedroom that John-Paul ended up with only really qualifies as such in the strictest sense, a small 9’ x 13’ space interrupted by a protruding closet and accented with a slightly curved wall. For a time, John-Paul went Full Millennial, sleeping on a mattress with no bed frame whatsoever. This didn’t last long before he decided to buy an inexpensive bed to house the mattress, but because of the size of his room, this new piece of furniture proved to be kind of a burden, drastically reducing the amount of space he would have for the rest of his belongings. 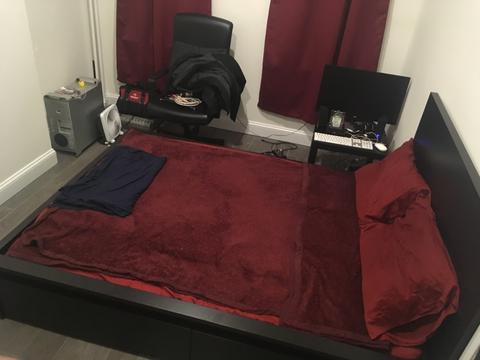 Version 2 - Notice how much floor space is taken up by just the bed.

Luckily, there were other options. John-Paul had already been nursing a passive interest in getting a loft bed. “I just thought they were cool,” he explained. “Being able to put a desk under your bed seemed like a fun idea.” A friend in college had used one, so he was able to experience one in a real-world situation, but John-Paul never found a justification to pursue his own loft bed dreams. That is, until he suddenly found himself sharing an apartment that was smaller than the one he lived in alone less than a year earlier. In order to make the most efficient use of his space, it was time to finally indulge his desire to sleep higher.

This journey started with a simple Google search: “loft beds for adults.” John-Paul was cognizant of the fact that he wanted his next bed to be one that can grow with him as he settles into his life in the big city. This bed had to not only meet his current needs, but also anticipate the ways in which his circumstances may change, including potential romantic relationships. Francis Lofts & Bunks was his first stop, and the sleek, contemporary style of our loft beds immediately caught his eye. Although design was what first appealed to him, it wasn’t his only consideration. Weight capacity was even more important. Luckily for John-Paul, we use high grade aluminum for all of our beds, meaning they can hold up to 2,000 pounds!

Having just recently started on a new leg of his career, coupled with moving into an apartment in one of the most expensive cities in the country, John-Paul wanted to wait to save up some money for this big purchase. He wasn’t going to make another rash bed decision, so he took the time to research other options. But he continued to find himself drawn back to Francis Lofts & Bunks, based on both the quality of the beds and a general interest in the company itself and our DIY approach to building quality loft and bunk beds for adults.

After a few more weeks (and paychecks) passed, John-Paul was ready to take the plunge, and Francis Lofts & Bunks was the clear choice. So on Halloween night, he set aside his fears and purchased his very own loft bed. In keeping with the holiday spirit, the bed arrived the day before Thanksgiving. Unfortunately, most of his friends and acquaintances were away visiting relatives, so John-Paul undertook the task of building the bed alone. In hindsight, he says the process probably would’ve been easier with an extra hand or two, but that realistically he “didn’t have a choice.” He was just way too excited to get the chance to use the loft he’d waited so long for. 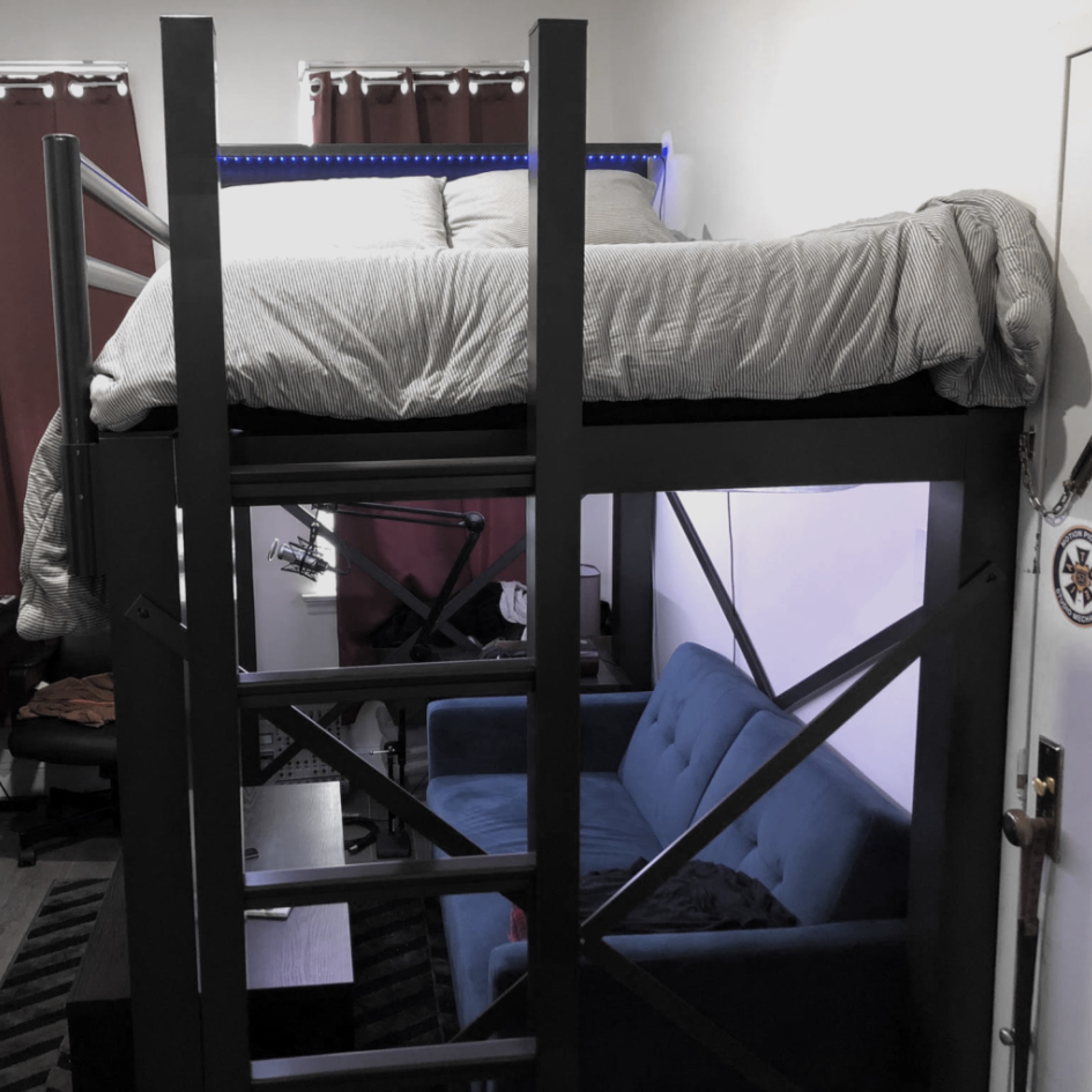 The loft bed in action! So much stuff fit into so little space.

Since building the loft, John-Paul has fit almost all of the stuff that once filled up his one bedroom apartment in Minnesota into a single small room. He’s now able to hang out on the couch in a private space to watch movies or play video games after getting home from a 12-hour day at work or a night out in the city, and then climb up into bed at his leisure. There’s no more fighting for comfort or making accommodations for his belongings in his own room, which can only make sharing an apartment with a new roommate that much easier in the long run.