For many people, the idea of the California king bed conjures images of opulence and luxury, a pervasive image that has been reinforced over decades by pop culture, entertainment, and clever furniture salesmen. And while the actual facts about the Californa king may not entirely align with this perception, the origin of this sizable sleeping option isn’t too far off.

The Big Myth: The California King is NOT bigger than a standard king size bed

The biggest misconception about the California King bed is that it’s much larger than a regular king size bed, but in fact, they’re different shapes and California king mattresses actually have less surface area than their king size counterparts.

A regular king mattress is 76” wide and 80” long. By contrast, the California king is 72” wide and 84” long, making it narrower, longer, and 32 square inches smaller than the more common king size bed. 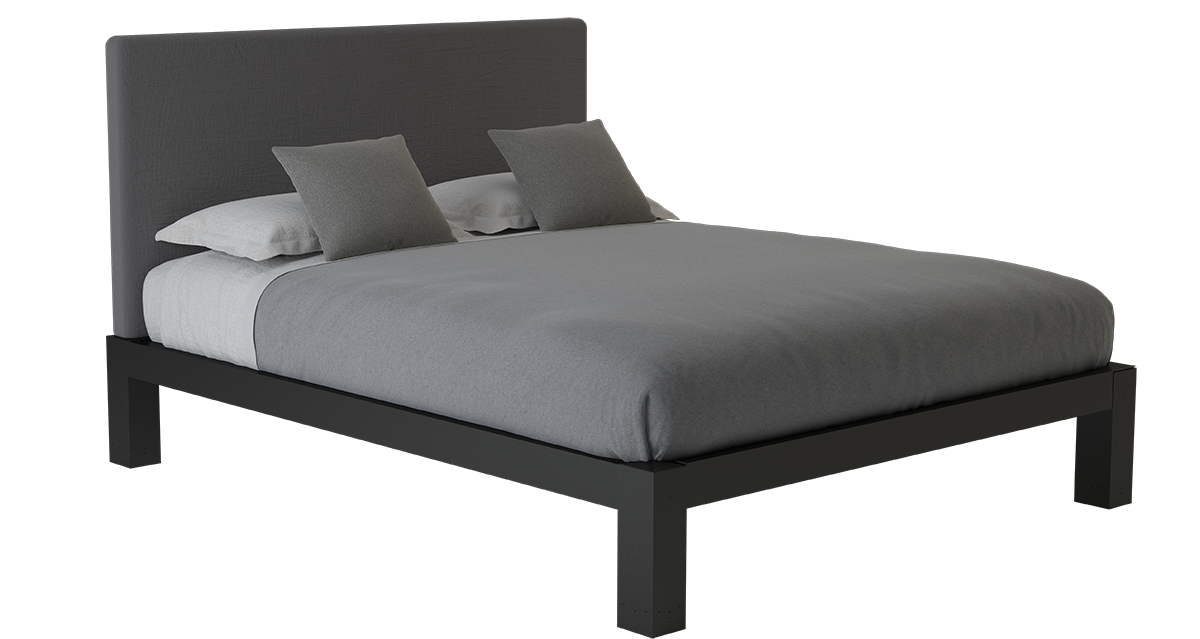 Why would you want a California King size bed?

In addition to having a cool name, the California king size bed primarily serves two purposes when compared to the standard king. The first is to better accommodate tall people. Because the bed frame is longer, a particularly tall person will have more space to comfortably stretch out. Though narrower than the regular king mattress, the California king is still wide (11 inches wider than a queen), making it ideal for most couples, so if you and/or your partner could always use a little more leg room, this might be the perfect bed size for you.

The other benefit of a California king bed is far more superficial, and intricately linked to one of its many origin stories.

Of the many accounts that exist out there about where the California king originated, the most well-documented and plausible also gives the bed it’s sun-soaked moniker. Sometime in the early 1960s, oversized, extra long beds started popping up in Los Angeles; more specifically, they were occupying the bedrooms of celebrities, film industry executives, and professional athletes. A local furniture manufacturer saw the increasing size of the mansions that these incredibly wealthy folks were building and moving into and realized that these customers would need bigger beds for their huge houses. Moreover, these people would be able to afford a high-end sleep experience. This obviously bright businessman coronated his new creation with a name that signified the luxury lifestyle of his clientele.

The California king actually pre-dates the now-standardized king size mattress. As interest in a larger bed frame made its way east — where most people weren’t living the lavish lifestyle of the Hollywood elite — other bed builders reimagined the dimensions of their biggest options to make the bed frames more practical for more people. By extending the width of the California king to 76” and making the bed shorter, the new “Eastern King” bed frame could now support two twin (or “single”) box spring mattresses. This meant furnishing this new bed frame would be easier and cost effective for the average American. And since most people aren’t tall enough to really necessitate the extra length of the California king, but they do like having the sleeping space provided by the extra width, the new king size bed quickly caught on with couples and became the popular version we all know and love today.

The Best Use of Space

Which leads us to the most common reason people still turn to the California king today: It simply looks better in their space. Remember, this bed was created to take advantage of humongous master bedrooms inside over-the-top mansions. The long and narrow frame of the California king usually strikes a grand and imposing presence when it’s sitting in a huge bedroom. Certainly moreso than its eastern counterpart, which tends to look squished and insignificant in an oversized room, even if it does technically offer a little more space for sleep.

From a purely aesthetic standpoint, the California king is usually a superior option for massive master bedrooms (as long as the people sleeping in the bed can live without the extra four inches of width).

To this day, a number of unverified alternative origins for the California king bed exist, the most common of which revolves around a California resident (no surprise there) with especially long legs who was unhappy with his feet dangling off the bed every night. In keeping with the industrious nature of his home state, this man built himself the perfect bed frame (rumor has it his arms were also particularly small and he still wanted to be able to reach out and touch his wife at night). How this bed custom built for personal use became a popular item among the rich and famous is sort of missing from the rest of this story.

While we’re sure that there are plenty of folks out there who have taken building their personal beds into their own hands (that’s actually how our whole company started), it seems more likely that the concept and popularity of the California king is owed to savvy businessmen.

Of course, a little positive PR doesn’t hurt. These beds are also commonly referenced in racy romance novels, adding to their mystique and helping to codify them in the culture as somehow more alluring than a regular old king size bed.

Is a California king the bed for you or your space?

California king beds aren’t all just a marketing gimmick. If you’re looking for a bed to sustain your leggy frame, or you want to make efficient use of a particularly narrow or very large and open bedroom without sacrificing a comfortable sleep experience for two people, the California king is likely the perfect size for you.